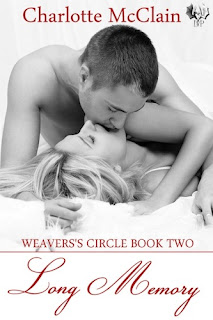 Welcome Charlotte and thanks for hanging out with us. My comments are (bold).

What inspired you to become a writer?

The Empire Strikes Back. I became a reader when I found The Hobbit in 5th grade, but when I saw Empire I really wanted to be in that world and I created a lot of fan fiction doing it. Then I wanted to start creating my own worlds.

Long and winding. I started out writing science fiction and fantasy, but I had a terrible time finishing anything. My stories were always ended up being more about the relationships between the characters than the technology or the magic and once I had to deal with that I lost interest. I have unfinished epics hidden in boxes and on old disks I can't even access anymore. So I shifted my focus to romance.

The first full length novel I completed was Three Alarm Tenant in 2001. Harlequin considered it for five agonizing months before they finally passed and by that time I'd written Spark of Desire and half of the upcoming Stuck By Lightning. The rejection took the wind out of my sails so I wrote The Rock Star's Retreat entirely for my own pleasure. I wrote several other things without ever thinking about publishing them and in about 2004 a friend challenged me to write a story using the name Kent Farrington for the hero. I was mulling that over when the whole idea of One Ring To Rule came to me. Which I wrote and mothballed with everything else because who was going to publish a novella length romance set at a comic book convention?

In 2007 I was in Korea when the Gather First Chapters Romance contest was announced. I decided to enter Three Alarm Tenant and got to work getting it ready. Then in July my laptop was stolen while on vacation in the Philippines and of course nothing was backed up. I started over using the notes I had managed to salvage and with help from my critique partners in time to enter and got into the semi-finals before I got too busy to campaign anymore. Not long after was the Amazon Breakthrough Novel contest which I also entered Three Alarm Tenant in and it made the semi-finals there as well, but I was on my way from Korea to Chile via the US during a March blizzard at the time so I had even less time to campaign.

During the summer of 2008 I was tightening up One Ring To Rule when I discovered the Romance Divas forum. I was hanging out there when Renee Rocco posted that Lyrical Press was accepting submissions down to, I don't know, 15,000 words? Being oblivious I said, hey I have something for that. Renee responded that she would be looking for my submission so I had to find out who she was. Yeah, the publisher. I'd opened my big mouth and now I had no choice. I submitted One Ring To Rule late on Wednesday July 2nd knowing that I was leaving town the next day and wouldn't be able to obessively check my email for the rejection I expected. Color me surprised the next morning when I had a contract. That weekend I started writing Long Memory. Since then I've published five titles with Lyrical with Struck By Lightning slated for November release and I've also worked with Freya's Bower, Liquid Silver and Wild Rose Press.

And I moved to Abu Dhabi.

(Your road to publication sounded more like an adventure and your diverse traveling must be great inspiration.)

I have previously worked with Alzheimer’s patients and you not only pegged Nonie in this book, but the effect it has on the people who love them. What made you use Alzheimer’s?

I based Nonie on my husband's grandfather who has not died, but left us years ago. He was a lovely man, very helpful and kind and now he's answering the television remote when the phone rings. Watching the dynamic between Bert and Maxine I started wondering how I would handle it, and then I started wondering about someone else handling it. I wrote most of the story while visiting their house for the weekend so I had Alzheimer's right in front of me.


Who was your favorite character to write?

All the characters are very dear to me, even tertiary characters. Many of them will eventually get their own stories. I think in this one Jean was my favorite. She's kind of a combination of my grandmother and my great aunt. When I was little I used to stay with my grandmother everyday while my mother was in college and then started working. I have vivid memories of long days spent with Gramma and Aunt Gert and the way the two of them interacted.

Can we expect a Weavers's Circle book three and can you tell us what character will be in the spotlight? (Crosses fingers it will be Jean)

Probably not Jean. After writing Secrets Everybody Knows I felt really guilty about the hero's sister's lot in life and I'm about halfway through that story. I also want to write Sheriff Daniel's story because he's got some history around why he came to town. That one was about half written on the laptop that was stolen in the Philippines so it's taken some getting back to. I also plan to write Lily and George's story. I'm going to be playing around in this town for a while.

If you were a superhero who would you be and why?

Now you realize that not only have I read comics, but I've written them. I'm still heartbroken that both times I was in the DC offices, Denny O'Neill (the editor of Batman) was out. I would love to be Batman. His quest for justice appeals to me. In particular I'd like to be Frank Miller's Batman. Failing that I'd love to be Marvel's Nomad. Or with Marvel's Nomad because he was hot.

(We have Batman in the house, lol. Love it!)

What was the last book you read?The last book I finished was City At World's End by Edmund Moore Hamilton. I'm currently reading Kim Harrison's Pale Demon which I borrowed electronically from my home library in the US to my iPad in Abu Dhabi. How cool is that?

(Oh my gosh, you can do that? Fantastical! The Hollows series sounds good and is on my to read list.)


Thanks so much for hanging out with us today. You were so much fun to interview!

LEAVE A COMMENT AND ONE RANDOM PERSON WILL WIN A COPY OF LONG MEMORY FROM CHARLOTTE!

You can visit Charlotte at Lyrical Press
Her blog
Liquid Silver
Freya's Bower
Posted by Kerri Cuev at 7:00 AM

Lovely interview. Your road to publication was an adventure, indeed! Congrats to your success! :D

Thanks for sharing your journey with us, Charlotte!

Lovely interview Kerri. And her journey to publication is so inspiring!

It certainly has been a wild ride.

I ache just thinking about that stolen laptop. But hey, you've done OK without it! You know, living in the Middle East, you really oughtta write a sheik story...

Wonderful interview. Thanks for sharing! Charlotte's journey to publication gives me hope. :-)